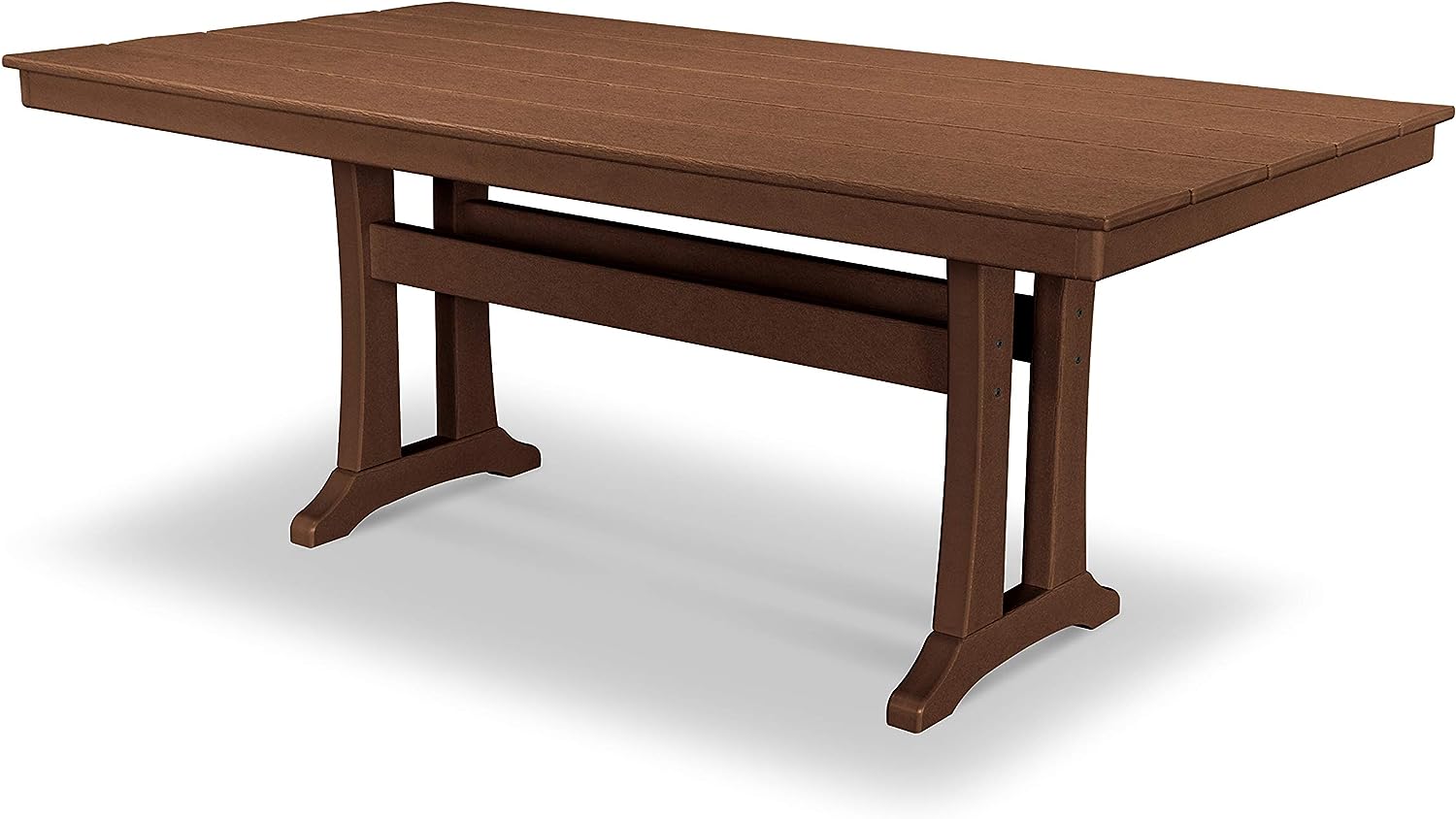 Create a relaxing outdoor dining atmosphere with the rectangular Farmhouse 37" x 72" Dining Table. This table seats up to six and features a sleek plank table top with space for plenty of leg room underneath. This classic all-weather table pairs well with a variety of POLYWOOD dining chairs to fit the look of your outdoor space.

One of the YouTube channels I follow recently posted an interesting and fairly kinky WCCW Tag Team match from 1982 I haven’t seen before involving a Penalty Box. Our beloved fan favorites, the von Erich Brothers, are battling a pair of evil and mysterious Asian Heels: Kabuki and the masked Magic Dragon.

According to the referee’s pre-match explanation:

“If a rassler breaks a flagrant rule that we think he deserves to go in the penalty box, he’ll be put in here for two minutes. The door is shut, locked, we got a key and a lock that’ll go on that. They will not be released till the announcer tells us two minutes are up.”

But then we go to the ring announcer Mark Lowrence who provides a differing explanation of the length of each lock-up:

“Penalty cages have been placed outside the ring. Rule breakers in this match will be placed in the penalty box: one minute for the first offense, two minutes for the second, and so on.”

So it’s not clear if every penalty lasts for two minutes like most Hockey penalties, or whether each offense increases the period of lock-down by another minute. So let’s get those ring jackets off the von Erich’s muscular bodies and see how the rule is actually applied in the match…

We start with some back-and-forth offense — Magic Dragon and Kabuki using plenty of Karate Chops with their “lethal” hands so we understand they’re exotic foreigners with deadly offensive weapons.

At 25:12 into the video, Kevin is not the Legal Man but he reaches over the ropes to assault Kabuki. However, the referee ignores this rule violation and no penalty is issued.

Then Kevin tags in and we witness this sweet “70-mile an hour” Throat Kick by Kabuki that nearly takes Kevin’s head right off:

At 26:51, the von Erichs break the rules again when Kerry enters the ring following an illegal tag. He reached the tag while standing on the ropes rather than with his feet flat on the ring apron. Again the ref fails to issue a penalty to these cheaters.

However at 27:00, Kevin rushes over to illegally kick the Masked Dragon at this, at last, results in a trip to the Penalty Box for this rule-breaker.

We see Kevin enter the cage at 27:20 to begin his two-minute lock-up. And now the two-against-one fun begins! The Heels work together to dominate Kerry with Karate Kicks and a ton of paralyzing Nerve Claws. Kevin watches, helpless in his cage like a trapped ape, shaking the bars in frustration as his brother is destroyed before his eyes.

“And the Dragon right now has both hands gripped into, like vises, into the back of the neck of Kerry von Erich!… It’s ALL Kerry von Erich — nobody to work with for the next two minutes…”

We see Kevin back on the ring apron at 29:43 so he was probably released at about 29:30. This means he was locked in the cage for about 2 minutes and 10 seconds — definitely longer than “one minute for the first offense” as explained by Mark Lowrence.

Almost immediately after returning from lock-up, Kevin recidivates by committing an illegal tag — leaning over the ropes to slap his brother’s leg rather than keeping his feet planted on the ring apron.

We don’t see the cage door close, but it was probably about 30:10 when Kevin began serving his second sentence.

Meanwhile, this enables the Heels to continue their double-teaming on the lone and suffering von Erich:

The Heels continue to rip Kerry apart with their relentless Pressure Points, digging into his shoulders, his arm pits, his pectoral muscles. In between Claws, they Karate Kick him in the head for good measure. It’s quite brutal and exquisite, with Kevin’s lock-up adding to Kerry’s doom and isolation.

Therefore, neither of the rules explained before the match (a standard 2-minutes per violation or an increase of 1 minute for each subsequent violation) has been followed. It appears they’ve actually subtracted one minute of punishment for Kevin’s second violation!

Kevin eventually makes the Hot Tag and secures his own Iron Claw on Magic Dragon at 32:46. Kevin then tags in his brother who gets some revenge on the Heels before being Karate Chopped back into submission and thrown from the ring like a jobber.

Kevin tags back in (legally for once) and secures a really nice Body Scissor on the grunting and groaning Magic Dragon Allspice Whole - 1 lb. But then Kerry tags back in and really gets his ass kicked. Kerry is made to look like the Wimpy Partner, constantly needing to be rescued by Kevin (when Kevin is not serving time in his cage.)

At 40:22, we see impulsive Kevin illegally storm the ring again and attack his opponents in their corner. His daddy should’ve spanked him more! He is sent back to the Penalty Box for the third time! We don’t see the door close, but his lock-up presumably began at about 40:40. Then we get to settle in and watch Kerry suffer more brutal 2-on-1 punishment as the crowd chants “Go Kerry! Go!“

In the background, we see Kevin exit the cage at 42:20, so his third incarceration lasted from 40:40 to 42:20 — just 1 minute and 40 seconds! What gives? If they’re adding a minute per violation as Mark Lowrence promised, then Kevin should’ve been locked up for a full (and wonderful) 3 minutes!

Upon release, an enraged Kevin immediately leaps right back in the ring and assaults the opponents, conking their skulls together like cymbals — what a fool! He is immediately sent back to the Penalty Cage for the fourth time! We see him enter the cage at 42:48.

However all hell breaks loose at 43:00. They must not have secured the lock, because Kevin breaks free of his bondage and again storms the ring, totally out of control. They ring the bell and declare Kabuki and Dragon the winners!

This really was a strange outcome, with Kevin made to look like a cheater and out-of-control maniac, having been sent to lock-up four times, abandoning his younger brother to the slings and arrows of outrageous Heel abuse. Are we sure Kevin is a Baby-Face??

I must say, when they were able to restrain Kevin, it sure was fun to watch Kerry’s utter torture and agony!